On 7 September 2016, AMTAC celebrated its 10th Anniversary with an Annual Address and Dinner. The Annual Address delivered at the Federal Court of Australia in Sydney and simultaneously broadcast to Adelaide, Brisbane, Melbourne and Perth was a great success.

Mr Holmes engaged the audience during his address entitled “Maritime Arbitration – Old & New.” The address invited attendees to travel back to the 1870’s to examine the birth of modern arbitration. The arbitration between the United States and Great Britain arising out of the operation of C.S.S Alabama, a Confederate ship during the American Civil War, presented many lessons and parallels to international arbitration practice today. From the creation of the arbitration agreement, appointment of the tribunal and delivery of a reasoned award Mr Holmes brought to life the history of the Alabama Arbitration and its relevance on today’s procedures. Interesting, despite the technological deficiencies, voluminous documents and distance between the parties a carefully construed award was announced a little over nine months from the Tribunal’s first meeting. A lesson Mr Holmes invited the audience to think critically about in relation to ensuring efficient tribunal procedures today.

A copy of the Address given by Mr Holmes can be found on the AMTAC Website.

Following the lecture, attendees continued the celebration at the AMTAC 10th Anniversary dinner, hosted at Ashurst. The dinner was attended by distinguished judges, barristers, arbitrators and maritime practitioners.

Georgia Quick, partner at Ashurst, welcomed guests to their beautiful new offices in Martin Place for a delightful evening. Newly elected Vice-Chair of AMTAC, Julie Soars lead the group in giving a special thanks to AMTAC Chair Peter McQueen for all his hard work and contributions over the last 10 Years.

Guest were treated to a special presentation by Kevin Sumptin, Museum director of the Australian National Maritime Museum. Mr Sumptin lead guests through the captivating story of “Ships, Clocks and Stars: The Quest for Longitude” on exhibition until 30 October 2016. The award-winning exhibition explores the history behind martime’s greatest scientific breakthrough. Solving the longitude problem forever changed maritime transport and even modern computer elements can be traced back these extraordinary nautical instruments.

The dinner was a wonderful celebration and AMTAC extends a thank you to all who attended. 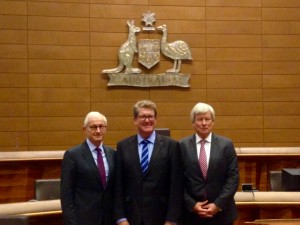